Handwritten letters offer a meaningful way to stay in touch with loved ones. When COVID hit last spring, Kenna Embree, who served as an independent living intern with Vincentian, launched a Pen Pal program like the one she participated in with Vincentian Marian Manor residents when she was a senior in high school.

Kenna still writes to her Pen Pal and wanted to create a similar positive experience for the residents across Vincentian to help them feel less isolated during the pandemic. Ten residents expressed an interest, so Kenna paired them with 10 of her friends.

Her friend Alyssa Getty was paired with Elsa, a resident at Vincentian Schenley Gardens. The two of them began exchanging letters in mid-July.

“I started by asking a ton of questions like what she did when she was my age, where she grew up, if she had any siblings, what music she enjoyed,” explained Alyssa. “She grew up in Latrobe and went to school for nursing. She has a sister, and neither of them ever married. She loved to travel, and Hawaii was her favorite place to visit.”

In her second or third letter, Elsa explained that because she suffered from back and neck pain, it took her a while to respond to Alyssa’s letters. But when she did respond, she included as much information as she could remember.

Her last letter included two pieces of paper — a crossword puzzle and a word search — and a pendant shaped like a half moon with the following poem by Edith Warton:

“There are 2 ways to spread light. To be the candle or the mirror that reflects it.”

“I wrote back and asked if she had any favorite books,” said Alyssa. “I told her I had just finished reading ‘The Five People You Meet in Heaven’ about the special people you meet who have a big impact on your life.”

Elsa never opened the letter. She passed away October 29, before the letter was delivered.

But Elsa’s cousin did open the letter. She found it when cleaning out Elsa’s apartment. Several weeks later Alyssa received a package in the mail that contained a letter from Elsa’s cousin and an ornament that belonged to Elsa.

“She told me she was glad that Elsa had a Pen Pal, and that she herself had a Pen Pal since 1959. They started writing to each other when she was 10, and they’re still best friends today,” said Alyssa. “I keep the ornament in my room to remind me of Elsa. The pendant is attached to my purse, so a piece of Elsa is with me every day.”

Many of our residents participate in a Pen Pal program. If you’re interested in learning more, reach out to your facility’s Activities Manager. 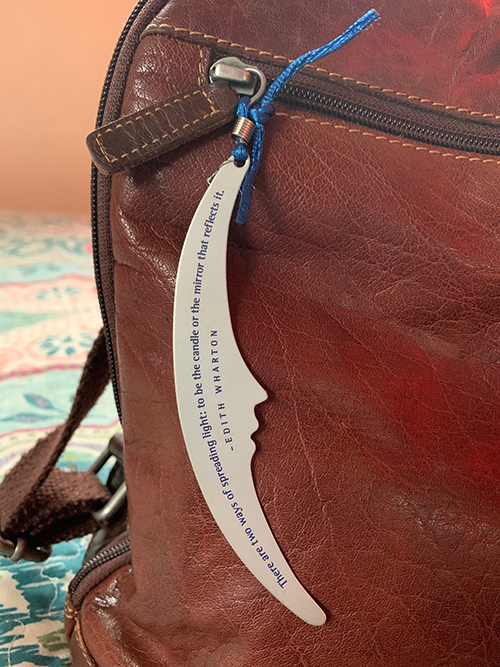